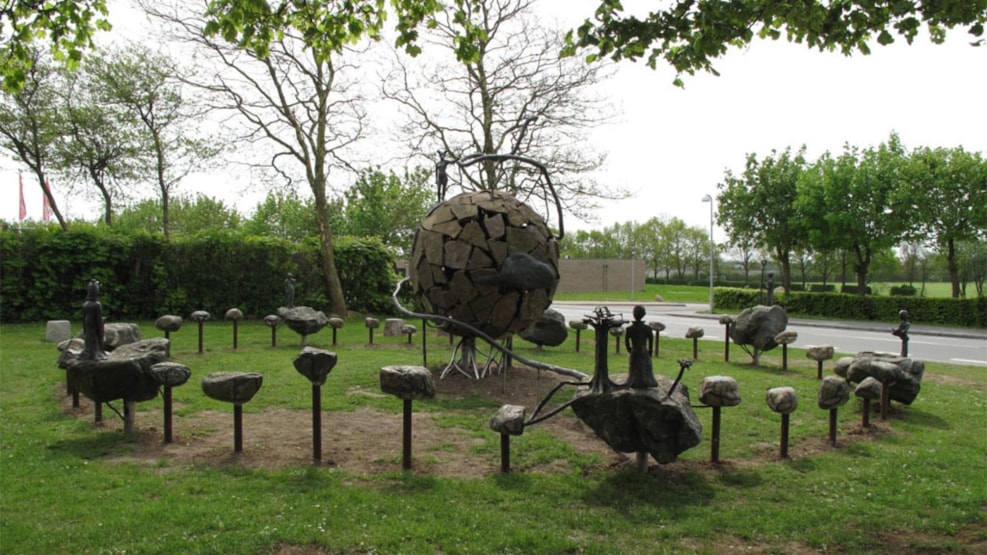 In June 1996, the little town of Fuglebjerg received a rather special gift. It was an original sculpture that was to stand in one of the school's playgrounds for the children to climb on. A controversial sculptor, Jens Galschiøt Christophersen, had been inspired by the French writer Saint-Exupéry's wonderful book, "The Little Prince". The writer was a military pilot during world war II, and whilst flying he had felt an inspiration to write this little book.
The story's narrator, who is a pilot too, meets the little prince in Sahara because the plane breaks down. The prince, who comes from a far away planet, visits several other planets and their strange inhabitants: a conceited man, a drunkard and a business man - then he makes frinds with a fox, a snake and the pilot, when he visits the planet Earth. But he cannot forget his friend from his own planet, a rose.

Jens Galschiøt Christophersen has placed each little planet around a bigger one, where one can go inside and sit for a little while (providing one is no bigger than a child). Each inhabitant is also represented, together with a 7 meter long snake, that some of Fuglebjerg school's pupil's have made with Jens Galschiøt Christophersen's help at his home on Fyn.
The sculptor is well known both in Denmark and abroad, especially because of his "Dirty Swine", that are to be seen in several towns in the countries where human rights have been offended. Also his "Pillars of shame" have the same goal: to make people aware of injustice.
Fuglebjerg's "Little Prince", however, has no political goal.
It is situated between the bus station and the library. Park your car in the library's parking space, and go down to the bus station and up the steps on your right.