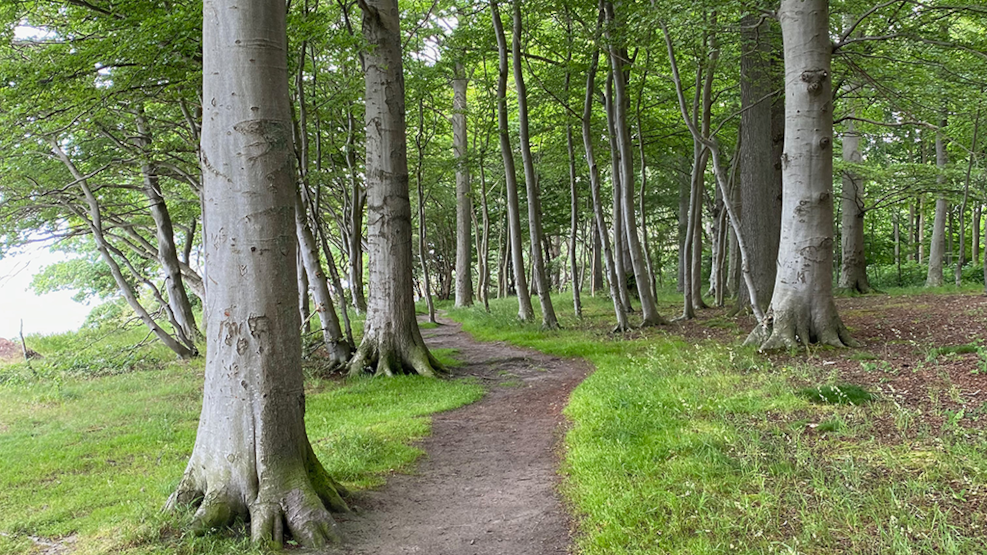 The entire Lagunestien (lagoon path) stretches from Næstved to Korsør, the southern part of the route starts centrally in the trading town Næstved and by the Næstved Canal, where the old industrial buildings are adorned with street art.

On the first part of the route you walk towards the cozy harbor and seaside town Karrebæksminde and Enø along Karrebæk Fjord. The fjord has been designated as an international nature conservation area. The low water level provides good living conditions for many bird species.

The next part of the route takes you up along Vesterhave and into the cozy port town of Bisserup. Fine nature experiences also await you here. At the coastal forests Kristiansholm Plantage, you can experience how "the beech reflects its peak in the wave blue" (text from the Danish national anthem). Between the two forests are the steep cliffs at Klinteby. The cliffs are a very fine example of how the sea shapes our shores when nature is given free rein. Here, the sea has exposed the various moraine soil layers that the ice has deposited during the last ice age.

You will pass many exciting things on the route from Næstved to Bisserup. Below you can read a more about some of the things.

Margrethevold is a newly restored rampart, located in Borgnakkeskov (forrest) right down by the fjord. Margrethevold, which is said to be named after Queen Margrethe jumper horse, is a medieval stronghold, also called Borrenakken. The castle bank is separated from the mainland by means of a dug moat, and the land from the grave has been used to elevate the bank. At Borgnakke is a well-visited ice house, and from here there is a view of the fjord.

Borgnakke and the ancient monuments. From Karrebæk, you will follow the country road over Saltø Å to Borgnakke Skov. Here is a group of large and well-preserved burial mounds. Both Borgnakke Forest and the varied neighboring forest Saltø Forest are suitable for hiking.

Karrebæk Church is a good landmark, as it can be seen from afar. The church was built in the 14th century in Gothic style with a double chapel and beautiful wood carvings.

Karrebæksminde. Karrebæksminde was built in the last century as a charging station for Næstved. Today, the city is a favorite excursion destination due to its cozy harbor environment and its good beaches. The bridge over the canal, which separates Enø from the mainland, is decorated like a locust by a local artist. In extension of Karrebæksminde you will find the town of Karrebæk, which is located high in the landscape and has a magnificent view of the fjord.

The forest by the beach. Karrebækstorp Forrest is a mixed forest with both deciduous and coniferous trees. The signposted route follows the gravel road through the forest, but it is also possible to walk directly on the beach.

Klinteby Klint. Until 1926, Klinteby was called Gumperup. However, it seemed the residents sounded a bit heavy and therefore the town name was changed to Klinteby. Klinteby Klint is a long, high and very distinctive sea cliff of clay. Klinteby Klint was designated in the 1970s for the location of a nuclear power plant, but now modern wind turbines stand here instead. There is a view from the cliff over Smålandsfarvandet, and in this water there are good fishing opportunities. You can take a detour to Menstrup Bjerg, which with its 43 meters above sea level offers a nice view.

Bisserup and Kristianholms Plantage. Bisserup was previously a port city for Slagelse. Today, Bisserup offers a cozy summer environment around the harbor. East of Bisserup, Kristiansholms Plantage is right down to the beach, and there are opportunities for walks along the beach and in the forest. In the forest are many good resting places overlooking the sea.