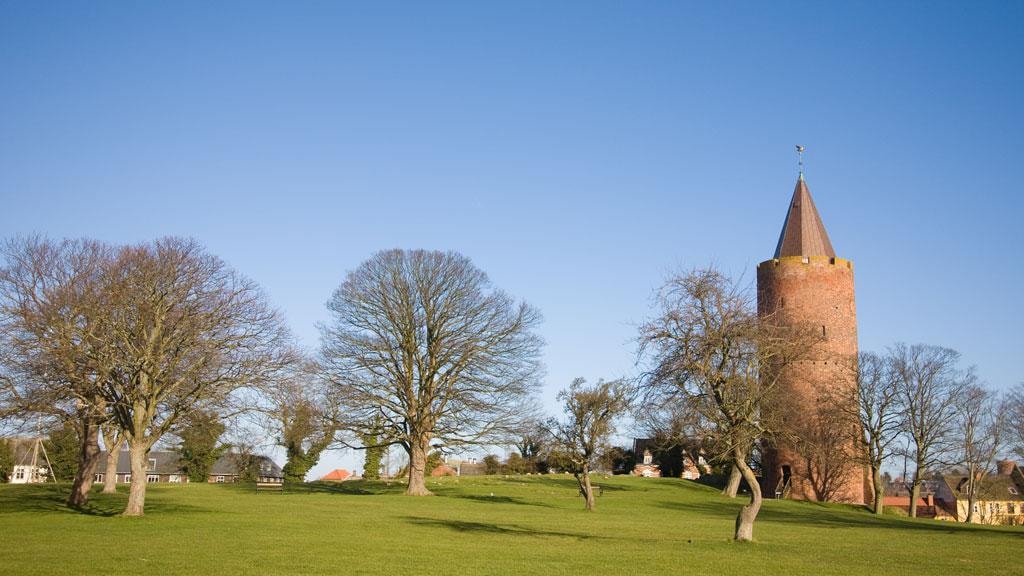 In the middle of Vordingborg is the old castle area, which is a beautiful and historic place to go for a walk. Here you can fully enjoy the view over the water, the green area and the buzz of history.

On this castle bank you can still see the remains of the 710 m long and 8 m high ring wall, which surrounded Denmark's most important castle in the 14th century. Several kings have had their residence here. It was here Denmark's first constitution was ratified, and from here the Vendertogts departed under the leadership of Bishop Absalon. And it was here the kingdom of Denmark gathered after years of division under Valdemar the Great (1157-1182).

It is also here that you will find the very famous Gåsetårn (tower), which is the castle ruin's best preserved part and Vordingborg's most important landmark. The tower was built in the 1360s as part of Vordingborg Castle. The castle was the country's largest royal castle, and the Goose Tower is just one of the castle's nine towers.

The golden goose on top of the tower was put up there to make fun of the German Hanseatic League. The Hanseatic League was then at war with King Valdemar Atterdag, and he teased them by claiming that he was more afraid of a flock of squawking geese than of the entire German Confederation.

The castle bank itself is completely free to visit, but it is also possible to buy access to the museum Danmarks Borgcenter, which is a state-of-the-art experience center that tells the story of the medieval castles, kings and power. Read much more about this under Danmarks Borgcenter.