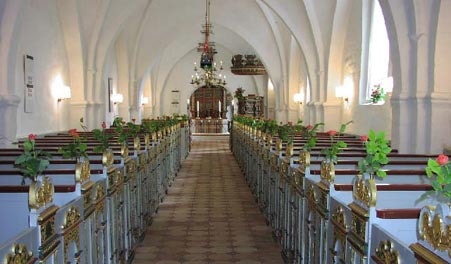 Toksvaerd Church is unusually long and has belonged to the manor of Sparresholm. The choir, nave and weapon house were built in roman times, the extension of the nave and the tower are gothic and the chapel is from the rennaissance period. The sacristy was built about 1600 by Jens Sparre who intended to use it as a burial chamber. The pulpit and the gentry's chairs are both thought to have been made in Abel Schroeder's renouned workshop in Naestved. On the gentry's chais you can see the crest belonging to Jens Sparre and Sidsel Parsberg of Sparresholm.