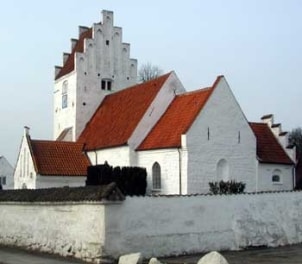 Lundby Kirke was built in 1400 century in both Romanesque and Gothical style in granite.

The altarpiece produced by the "Snedker Rasmus Hansen from Beldringe" is from the 1732-1733.

West of the church a monument stands for the known throughout the country Svend Poulsen, better known as Svend Gønge.

Choir and ship are from the Romance Time, while the 3 additions: Tower, porch and vestry are lategothical.

The church like most of the churches of South Zealand belonged under the king and later under the rider property. 1774 came Køng church under the manor Engelholm at Tappernøje.