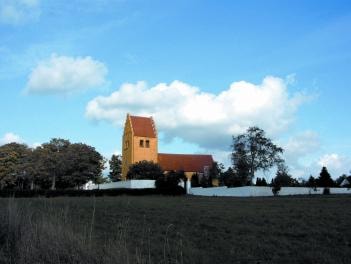 Holtug Church dates from appr. 1150 and was originally made of chalk-stone in the Romanesque style.

Only the long-walls of the nave, i. e. the middle part of the present church, remain. In one of the ashlars of the old choir, now part of the new choir´s south side, appears a runic inscription: "Tirad rist" (Tirad cut).

When the choir was rebuilt, the nave was covered with three cross-vaults. Of these, only that of the west remains in complete condition. In this vault we also see som frescoes of the so-called "Master og Hoejelse".

The church is open from 8 am to 5 pm from April through September.